Skalitsa's Bulgarian Gite is no longer up for sale. 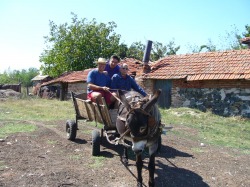 The village of Skalitsa which means 'Little Rock' is located in Southeast Bulgaria. Its nearest towns are Yambol, Elhovo and Radnovo all around 30 minutes drive from the village.

Yambol and Elhovo towns are thriving and continue to be rejuvenated by popularity and investment from many foreigners and Bulgarians. Radnovo is untouched by foreigners and is a relatively unknown but very attractive town.

Skalitsa is one of the larger and more important villages in the area and is an up and coming attraction with available investment from Europe into the infrastructure and facilities there.

There has been a major clean up and fresh look in the village with the school having been renovated and money other public building having been given a face-lift. There is also brand new theatre/concert hall that opened in the village centre last year that attracts artists and performers nationally and from around the world.

It has everything you need in the village including two garages, post office, a doctor and dentist surgery, two veterinaries, a chemist, a variety of grocery/food stores, a clothing/linen/shoe shop and a beautiful orthodox church which celebrated its 150 anniversary in 2007.

During the summer months, (and there are many of them) there is local produce sold from stalls in the village centre park - yes it has a big public park in the village centre as well. It also has a unisex hairdressing shop and many bars scattered around in and around the village where you can get refreshments, snacks and most cater for basic food provisions.

Skalitsa also has its own bakery, window double-glazing factory, metalwork factory, wood-processing factory and around the village many new vineyards have been planted from private investment.

Bus and taxi services run regularly from the village centre to all satellite villages and major towns such as Radnovo, Yambol, Elhovo including both Nova (New) Zagora and Stara (Old) Zagora westward bound.

It is not widely known but Skalitsa is famed for its healing stones, which are geographically positioned at a point where two magnetic fields cross. There is apparently only one other place on earth where this happens! Research has been made on the site along with media attention, all present evidence of the stones having healing properties for arthritis, rheumatism and various other related and unrelated ailments.

There have been two sets of film makers in the village in 2007, one film crew from Belgium the other from Hollywood USA, choosing Skalitsa for its magnificent setting on a raised rock base within the Thracian Plain. This was chosen over other Balken countries including Croatia, Romania and Former Republic of Czechoslovakia, the Skalitsian scenery could not be compared with!